I took a juice detox to help cleanse my system and feed my body with vitamins and nutrients that I felt it was lacking in. Before anyone kicks off this is not something I plan on doing regularly or anything but
I just wanted to try it out (kind of especially after Kylie Jenner tried) but was not going to spend £100 on a professional one, instead I found out the main ingredients in them and decided to make my own!
Day one…

Ugh this is not happy healthy tasting. I bought this yesterday this could not have gone off in one day. Save me.
As I drank the first juice a silent tear left my eye as I realised that this may not be as fun as I thought. It’s okay though as I reminded myself that this was to cleanse my system and carried on drinking. Although I wasn’t supposed to start drinking till 9am it was 7:30 and I was hungry so I wanted to drink half the bottle before and then half after. This green juice was by cold press and was mainly veggie based and to be honest it wasn’t that bad, I mean the celery did mess it up but knowing that I was having all my nutrients for the day before 9am wasn’t bad.
Lunch consisted of a very orange drink by Tesco cold press range containing lovely things like orange, carrots, mango, lemon, pineapple and… Passion fruit. I was honestly not feeling the passion and no matter how much I shook it all tasted like lemon. Even though it was quite tangy I carried on throughout lunch as it’s very hard to falter when everyone around is waiting for you to fail so I was able to keep calm and carry on.
By 3pm I was allowed a more calm pineapple juice which kinda made me feel like a roadman as I wondered how people carried a litre of this drink with them every day. I soon realised that I was running low on fuel and no matter how much I drank I felt very sleepy and the weather was not helping at all. The sun was getting to me and soon enough pineapple juice became sickening to me.
Finally I was onto the last juice of the day which was beetroot juice and to my surprise, it wasn’t the worst one. It definitely gave a filling feeling although I still really felt tired so decided to sneak a peak into the kitchen for something that would lift my hopes. Now I did go for green tea which is acceptable in the detox but… I chose chicken! Okay no one was home and there was just a pot of fresh rice and curry so I controlled myself by limiting it to only three minuscule pieces of chicken. Honestly it was the best thing I had all day, it was also the moment I realised I would never make a good vegetarian.
This did allow me to strive on to finish my work and called it a night at 9:30pm
Day two…

OKAY I HAD TO! Yes I had to eat the Asian dessert okay I have a new baby cousin and these desserts were in her name, she might grow up to find out I didn’t and then where would I be. It was really sweet and don’t worry they were really small and I only had a few but it was a lovely morning I can assure you.
The green juice was much better in fact I think the other one was just a one off because this bottle tasted really sweet (for vegetables). The main thing is that it didn’t make me feel like I needed to force it down which is always a good thing. I still started drinking at 7:30 but by lunch time I had finished one juice. I really eagerly drank my next juice which was awesome orange juice before I realised that orange juice makes me want to pee so much… I was left having to go to the bathroom three times then!! Although after I got to drink a lovely smoothie that was just really refreshing especially cause it had a lovely taste to it and I know I don’t like passion fruit but it was quite well hidden in this bottle.
For dinner I wasn’t really feeling the beetroot so I just finished of the orange juice and drank a glass of pure green tea.
…
Okay guys don’t judge me but basically… I failed.
When I got home I was super down so when I walked into the kitchen I just ate everything! At first it was just a few pieces of lettuce and then bits of wrap from my siblings and I ended up just giving in and ate a plate of rice and chicken curry with some salad. Honestly I wasn’t as ashamed as I could have been but that’s probably because it was one of the most filling meal I had.
Day three… 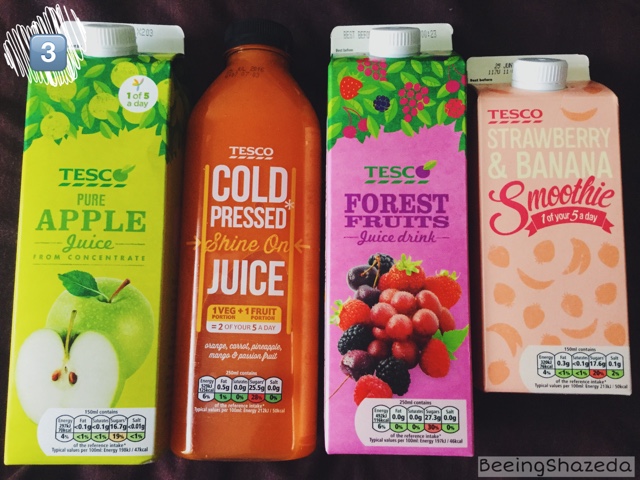 I started my day off right with a shot of apple juice with some spinach and pineapple extract which might seem a little weird but I wanted something more thick to replicate the previous morning juices but a little bit more thinner so it would be easier to drink and it was really good. I was able to drink it and not choke on spinach pieces (so much) but then after I felt energised and if I needed a pick me up I would just take a swig from the carton.
My lunch  was much better as it did make me feel really refreshed and it wasn’t so tangy which I was pleased with. I’m not going to lie I did have a mini tuna subway but I honestly do not mind just because I finished the complete juice bottle which holds three servings but still felt hungry and call me weak or fat or whatever does not bother me as I was honestly hungry so I ate.
I carried on with the juices and had the smoothie which was super sweet and thirst quenching, I was super okay with my luncheon so I didn’t need to have the fourth juice as I was having a chill day and was super pleased with how it ended.
In conclusion I like food and if I ever repeated this I would be well aware that I could not complete cut out food because I have a certain belief in my gut (maybe just stomach) that if I was hungry then have some water drink some juice but if you are still hungry then eat because starving myself was never my intention but rather to fill me with nutrition and vitamins in which I felt I was lacking and that’s what this detox totally did. I don’t think it had a massive effect on my weight but my skin was really healing well and lots of scars and things were fading much more in scrubs. I am never going to do a juice or water only fast cause I know I couldn’t ever keep it for too long (three days is apparently too long for me) but I think I am define lay going to add juices especially cold press juices to my everyday diet and lifestyle. The particular brands were good but I am still on the lookout for the best and my favourite juices.
I would definitely buy the beetroot juices again and the smoothies may not have been the healthiest but they tasted exactly like the mcdonalds smoothies which I think is very important information!
Hope you enjoyed my experience with a juice detox, have you ever tried it? What was your favourite juice, let me know in the comments below 🙂